I’ve been going to Burning Man for a while now, and I, like pretty much everyone else out there, am enamored of the ideas of large-scale projects on the playa. This year, I’ve got a few people camping with me, and I figured a shade structure was in order. I’ve seen a lot of different designs, have experience quite a few of them, but none of them seemed to really match up with what I wanted from a structure. Here’s the list and my thoughts.
Geodesic Dome
I camped with a couple that built a moderately-sized one of these. It took them a solid day to put up, but when it was up, they did pretty well for themselves.
Pros: relatively cheap for the volume you get, sturdy even in high winds, tried and true.
Cons: Difficult to set up, hard to cover well, doesn’t even try to keep out dust, difficult to take down

Conduit Arch
This is the type of structure Jeff used to make. It went up in about 30 mins.
Pros: Very cheap for the volume you get. Very easy to set up and take down. Doesn’t fall over in wind.
Cons: Small footprint. Only keeps out sun, not dust. Bends quite a bit in high wind.

Hexayurt
These have become a pretty common sight on the playa. I’ve never been in one, but I’ve heard good things.
Pros: Keep out heat, dust, wind, and sunshine. Easy to set up. No flex even in high wind.
Cons: Slightly more expensive than other options. Too short for me to stand up in (6’8″).

My personal tent is quite large, with a foyer-style setup, and 3 tent rooms around it. It provides adequate shade, but it does get really hot inside and it’s time to try something new. I was exploring larger hexayurts when I ran across this post: PDF. The design seems solid, though not geodesic, so not infinitely scalable. I decided to build some prototypes and see how the shape held up.

First, my girlfriend built the 4-sided paper example in the PDF. The design seemed solid, so we decided to keep going and make a bigger model.

I did the first design at about 1/12 scale using thin cardboard and scotch tape.

After that, I decided the cardboard one was still decent, so I pressed on with an actual scale model. As the final material is 4′x8′x1″, and something like foamcore, we decided to use foamcore as a test material. We got 6 sheets of 30″x40″x3/16″ material, which gives us a 3/16 scale model. Since the final one is going to be something like 22 feet across, this is still a decent-sized model. I followed hexayurt instructions and still used scotch tape for most of it, not wanting to go too far out of the realm of physics for the final result.

I have some concerns about the design.

Since the only thing holding the pieces together is tape, if the tape fails, it could be disastrous. Granted, I’ll be using extremely high-grade tape and taking recommendations from the whole of the internet on which tape to use, and maybe even doubling up, but even so, physics is physics, and I may get out there and the wind may tear this thing apart. I set up our industrial fan in front of the model and as long as there’s even light pressure on the dome downwards, it doesn’t show a hint of flex, blowing over, sliding, or anything. I think that as long as the tape holds, the shape is decently aerodynamic and shouldn’t be a huge, dangerous, fiberglass kite.

The main square on the top will be 11 feet off the ground. Holding it up, taping the sides, stopping it from blowing over, and stopping it from tearing apart all in playa wind conditions sounds line a nightmare in the making. So long as we don’t have constant wind, I think we could get the whole thing set up in 6 hours, easy, and I’m pretty sure we could do it in the dark if we had to. I think the design is flexible enough that small tape would hold at the start, and we could reinforce as time went on. I’ll be doing a trial run with cheaper tape as a test, but it won’t be on the playa and it won’t be 60mph winds, and it won’t be 100 degrees out.

Finally, I worry that the whole thing will be a big oven. People say the insulation is good and that the darkness is good, and that the whole thing can be aerated and swamp cooled and whatnot, but I worry that 8 hours of blazing sun will cook us. We’ll have 4 doors as options, but will it be enough? Time will tell. People survive in hexayurts, I assume the concept is the same.

I haven’t come up with a good name yet, icosayurt? tetrahedroyurt? Snub yurt? 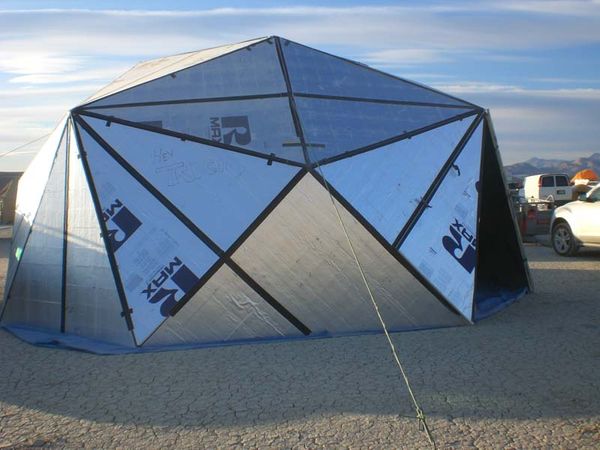 Burning Man 2011 has come and gone, and I’m pretty damned happy to report that the conceptualization, execution, and result of building this type of dome was almost a